The Milstein Hall of Ocean Life

When the children of Irma and Paul Milstein were young, their parents – like so many before them – took them to visit the American Museum of Natural History. The place that held the greatest fascination was the “Whale Room.” By the time the Milstein children grew up and had children of their own, the iconic Whale Room had become a frayed relic. Wanting to recapture the awe of the “Whale Room” for future cohorts of children, Irma Milstein, long-time Board member of the Museum, and her family, spearheaded the refurbishment of that legendary Hall.

In 2003, the beloved blue whale returned to its perch, suspended high above the 19,000 square foot exhibit floor, its arrival heralded by newspapers across the U.S. The famed 1930s and 1960s dioramas were updated with new background paintings and fiber-optic lighting. Leading-edge technologies produced striking visual effects. New displays were linked to schools via state-of-the-art hardware.

The great mammal’s spectacularly renovated home was re-born as the Irma and Paul Milstein Family Hall of Ocean Life and, with that event, the venerable “Whale Room” entered the 21st century.

The Milsteins’ leadership didn’t end with capital improvements. It was followed with hands-on engagement in continuing and new program initiatives. The assets of Milstein Hall of Ocean Life are being leveraged with a series of innovative public and scholarly programs. Among the new uses of the legendary Hall:

All of this builds on the legacy previously created by Paul and Irma Milstein with Milstein Hall of Advanced Mammals.  Completely renovated and named in 1994, the Milstein Hall of Advanced Mammals now stands as an important part of a continuous loop on the Museum’s fourth floor that tells the story of vertebrate evolution.  Presenting an impressive collection of fossil remains including that of Cave Bear, Horses, Irish Elk, Mammoths, and Mastodons, the Milstein Hall tells a fascinating tale of great diversification, sudden extinctions, and the forces that determine the success or obliteration of life.  Mammals evolved at nearly the same time as the first dinosaurs, and the roots of the mammalian line reach back almost 300 million years.

Milstein Hall of Advanced Mammals also contains three giant murals, commissioned by the Museum from the artist Charles R. Knight in 1911, which were restored and returned to view for the first time since 1966.  Knight was one of the first artists to re-create animals and environments of past eras based on careful study of the fossil record.  In addition, smaller paintings by Knight serve as evocative illustrations of extinct creatures in their natural habitats. 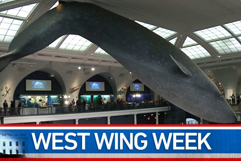 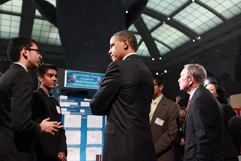